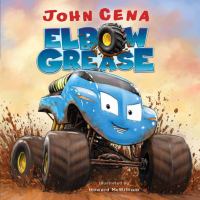 Search for related items by subject

JOHN CENA is a beloved entertainer and dedicated philanthropist. His films include Ferdinand (2017) and the upcoming Transformers spin-off Bumblebee in 2018. Inspired by Richard Scarry--one of his favorite children's book creators--John has brought kids Elbow Grease, a story for young readers inspired by his own experiences growing up with four brothers, and one that shares his inspiring personal credo: hustle, loyalty, and respect. Visit him at wwe.com/superstars/john-cena HOWARD McWILLIAM is the illustrator of eight picture books. His first, I Need My Monster , won seven state young readers' prizes, and has been translated into five languages. His other works include the popular What if You Had series; Hey, That's My Monster ; Schmelf the Hanukkah Elf; and When a Dragon Moves In. He lives in the UK with his wife and three young sons.